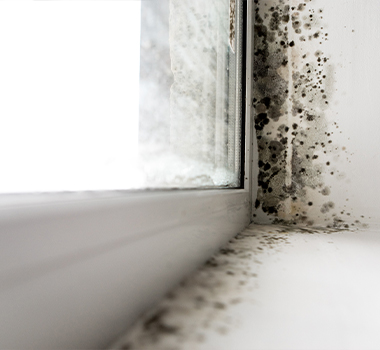 Christopher Denn, 31, has said that they have contacted the landlord Bromford Housing but after nine months they are still waiting for the company to sort out the problem

A family says mould spores are forming every week in a children’s room as they fight a daily battle with damp their landlords have not sorted out in nine months.

Christopher Denn, 31, from Priors Park in Tewkesbury said the situation is so bad they must constantly throw out clothes and other goods, reports Gloucestershire Live.

His partner Kayliegh Williams, 28 suffers from anxiety and is currently 13 weeks pregnant with their third child.

Their landlord Bromford Housing has said they are “taking active steps to address the true cause of damp and mould”.

Christopher said: “We are just getting nowhere with Bromford housing. We reported the extent of the mould problems we have been having in October last year.

“We have two sons in our two bedroom top floor flat and as much as the eldest has now been diagnosed with asthma, he has an inhaler for his breathing.
“The boys are only one and two years old and we can not do anything with their bedroom to stop the mould spreading and ruining the bedding.”

The spores are also appearing in the kitchen and the living room.
Mr Denn said: “In the kitchen, the wall is covered in black mould. I am autistic and have severe OCD and it is not somewhere you want to be able to prepare food for the family.

“We have had to bag up and throw away our clothes. The smell of mould is on them and mould has destroyed our clothing.”

“One of the boy’s car seats was against the wall for a couple of days and mould spores were growing on it so we had to throw that away too.”
Christopher said it is not the right environment to bring children up in.

He continued: “We were told to move our eldest’s bed away from the wall but there is nowhere to put it.
“We just do not know what to do. My partner is pregnant and we know we cannot buy anything for the baby as it will be affected by mould.
“We are devastated we cannot set up the home ready for our third child.
“I have asked for a suitability survey to be carried out on the property as I do not feel it is what we should have been given. We just keep going back and forth. There is a health and safety aspect of it.

“Our child cannot explore the home like a toddler should because of the mould on the skirting boards and around his room.
“It is not pleasant living here and not good for our family.”
Housing provider Bromford said they are working with the family to try and resolve the issues they have raised.
Associate director of localities at Bromford, Charlie Jackson said: “We are aware of the case at Priors Park and are working closely with the customer to address the issues they have raised.

“A survey is being carried out at the property and we are taking active steps to address the true cause of damp and mould.
“We will continue to be in touch with the customer to keep them up to date and resolve the problems.
“We are committed to tackling damp and mould problems in our customers’ homes to prevent these kinds of situations happening in the future.”

The Dwelling Doctors offer Mould Removal and Condensation Control services that help to eliminate Condensation & Mould once and for all.