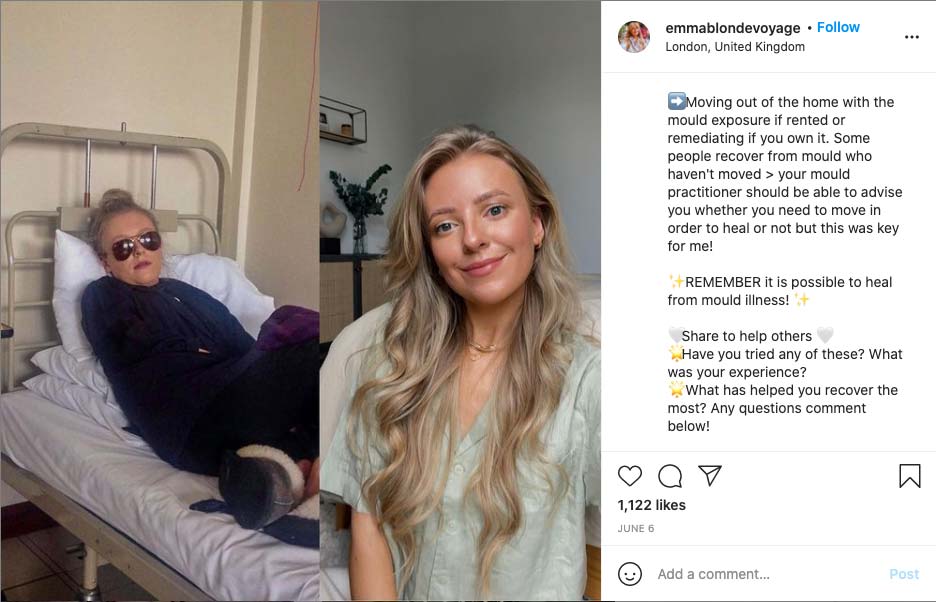 A woman who was ‘poisoned’ by mould twice after it infested her flat and left her confined to a wheelchair says she had no choice but to throw away everything she owned and start again.
Emma Franklin, 28, developed a chronic cough, muscle spasm, a painful rash and hair loss just two weeks after moving into her new house in 2017.
The blogger was left bedridden by the mystery illness and needed round-the-clock help as she was unable to care for herself.
Emma already had health issues after battling Lyme’s disease and thankfully her doctors recognised her new symptoms and tested her urine – finding high levels of mould toxicity.
Mould can produce allergens and even toxic substance that Emma was allergic to – and it was discovered growing on the ceilings, in kitchen cupboards and in the conservatory of the house.
She packed up her things and moved to another new house where she started to feel better but rapidly went downhill again in 2018.
Emma and her doctor suspected the mould spores had ‘infected’ her belongings, so she moved for a third time after giving away everything she owned.
She is finally on the road to recovery and considering moving abroad where the climate is less damp to escape her new allergy to mould.
Emma, a content creator, from Stafford, Staffordshire, said: “It’s been the craziest few years of my life.
“I can’t believe a bit of mould left me so unwell.
“I honestly felt like I was dying – I couldn’t walk, and I was in physical pain every day.
“I developed an allergy to mould and I’m considering moving to Spain where it’s less damp.”
Emma was first diagnosed with Lyme disease in 2007 after she mysterious fell ill for years.
Doctors finally discovered she was suffering from Lyme’s disease, and she believes it was contracted during a visit Florida in 2003.
Emma battled the illness for nearly 12 years in total and was on the road to recovery.
She had finally moved out of the family home in 2017 ready to start her new life, however just two weeks into living in her flat, Emma fell ill once again.
She said: “I had lost over 10 years of life to Lyme disease and finally back on track.
“I was so excited to be in my new flat but two weeks in and I went downhill.
“I knew it wasn’t Lyme disease – something else was making me ill.”
Emma developed a plethora of unusual symptoms – including chest pains and difficulty breathing.
She was left bedridden and sleeping up to 23 hours a day from extreme exhaustion.
Every day she was discovering new symptoms and desperate to find the cause of the problem.
She continues: “I was suffering around 50 symptoms and finding new ones daily.
“I couldn’t do anything for myself I was in so much pain – I was utterly miserable.”
Emma spoke with her doctor who recognised her symptoms.
She tested some of Emma’s urine and discovered she was suffering from mould toxicity.
Moulds produce allergens, irritants and, sometimes, toxic substances.
Inhaling or touching mould spores may cause an allergic reaction, such as red eyes, sneezing and a skin rash.
Emma said: “I think because my immune system was weak already, I was more susceptible.
“I had a really extreme reaction to it.
“It was such good luck my doctor knew the signs and I finally had some answers.”
After searching the flat, Emma’s family found spots of mould growing in several spots throughout the house.
She quickly packed up her things and relocated to a new house in Stafford and started feeling better.
In 2018, a year later, Emma started going downhill again and experiencing all the same symptoms.
Emma and her doctors believed the mould spores from the house had ‘infected’ her belongings and come with her to the new place.
Once again, she found mould growing around the flat and had no choice but to get rid of everything, including her clothing, bedding, and personal items like jewellery and photos.
She said: “In my second flat, I was recovering, so I would keep all the windows shut and whack up the heating.
“I now realise that was helping the damp and mould breed.
“It was so heartbreaking but left everything behind and had to start again.”
Emma moved to a third property and is finally starting to feel better
However, she has developed an allergy to mould and is sensitive damp.
She chronicles her health journey on Instagram and TikTok and current has over 13.3k followers and 318.9K likes on her videos.

The Article First appeared in the DAILY MIRROR:
Poisoned by my mouldy flat and left in a wheelchair with 50 painful symptoms

Emma Franklins on her instagram shares the 5 things that have helped her back to health which include getting away from or fixing the mould problem.
The Dwelling Doctors can provide a black mould and condensation removal service to help avoid mould toxicity illnesses. :

Emma says: “Moving out of the home with the mould exposure if rented or remediating if you own it. Some people recover from mould who haven’t moved > your mould practitioner should be able to advise you whether you need to move in order to heal or not but this was key for me!”